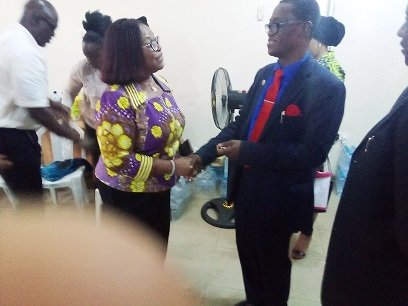 The Director-General, Lagos State Public Service Staff Development Centre (PSSDC), Magodo, Dr. Senukon Olufunmi Ajose-Harrison, has advised all eligible officers in the Lagos State Civil Service partaking in the ongoing Y2020 Structured Training Programmes for promotion to be good ambassadors and advocates of positive change, urging them to contribute to the enactment and implementation of policies and programmes that are in line with the 6 development pillars of the the present administration.

Ajose-Harrison, who paid an official visit to assess the progress of the exercise, also sensitised participants on the outbreak of Corona Virus. PSSDC, on Monday March 2, began service-wide implementation of Y2020 Structured Training Programme facilitating learning for about 4,000 staff who are eligible for year 2020 promotion exercise at four designated centres in the Ikeja axis of the state.

Speaking on Tuesday at the Women Development Centre, Agege, the Director-General advised participants to contribute meaningful to the training programme and relate well with their facilitators with a view to internalizing and putting the knowledge, skills and attitude that would be acquired into practice at their respective MDAs, saying Lagos State will continue to step up in every sector.

Ajose-Harrison noted that three variables Knowledge, Skills and Attitude were paramount to the success of every public servant, adding that PSSDC is ever willing to provide support in the area of capacity building encouraging participants to "recharge their intellectual battery".

The Director-General said the essence of the training programme is to provide an avenue for participants to share their thoughts, improve their skills and knowledge through social interaction reiterating that participants must be conscious of the current administration's T.H.E.M.E.S Agenda, saying everyone has a role to play in ensuring positive change.

Ajose-Harrison admonished participants to be result-oriented, resourceful, tolerant and maintain good cordial relationship with one another for the common good of the state stressing that good relationship with people is key to the success of an individual advising Public Servants not to be envious of one another.

"One word affecting development of people is envy. Never you join people to envy, it kill ideas, it does not allow nation to move forward. Maintain good relationship with people. Everyone has potentials, your responsibility is to unleash potentials for Lagos to move forward, everyone should see themselves as a solution provider", he said.

He wished the participants well as they advance in their respective careers and thanked the government for suggesting training before promotion, saying it is the global best practice.

Speaking on the outbreak of Corona Virus, Ajose-Harrison appreciated the efforts of the state government for the aggressive sensitization and proactiveness in ensuring that the virus does not spread beyond the index case adding that the government will repeat the same feat it used to defeat Ebola virus.

He advised participants to maintain good respiratory hygiene, eat plenty of fruits and vegetables to boost their immune system saying everyone has to take precautionary measure to support the government in curtailing the spread of the disease.